Felony charges for Texas teen driver who collided with cyclists 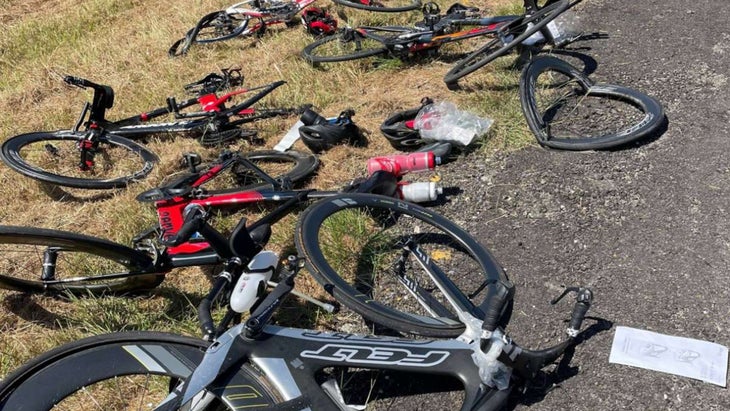 A 16-year-old Houston, Texas driver was charged with six counts of felony aggravated assault as a result of a collision with a group of cyclists in September.

“Today we have filed six felony charges of aggravated assault with a deadly weapon against the juvenile in question, one charge for each cyclist that was injured,” the Waller County District Attorney Elton Mathis announced in a statement.

The group of cyclists and triathletes were out riding on September 25, in preparation for Ironman Texas, and were about 70 miles into their ride, near Waller, Texas outside of Houston, when the juvenile driver attempted to “roll coal” on them — a practice in which the driver purposely accelerates and uses an augmented exhaust system to blow black exhaust smoke. “Rolling coal” can be used as a technique to harass people on the road or to engage in a form of pollution protest.

According to eyewitness accounts, the driver first blew smoke on a cyclist behind the group and then sped up in an attempt to accelerate and roll coal on the group, but instead was unable to slow down and plowed into the riders.

Six of them were taken to the hospital, with two having to be airlifted out.

Read this full article at Triathlete.com

Italian veteran rider Dario Cataldo is the final signing for the Trek-Segafredo team ahead of 2022. The 36-year-old, who has been racing with Movistar for the past two seasons, has penned a one-year deal with the squad.

Cataldo is the 11th new signing for Trek-Segafredo in a busy transfer season for the team and brings its roster up to 31 riders for next year. Other new signings include Jon Aberasturi, Simon Pellaud, and Tony Gallopin.

Cataldo has been a part of the top tier of cycling since 2007 and has ridden for teams such as Liquigas, Quick-Step, Team Sky, and Astana during his career. He has previously won stages of the Giro d’Italia and the Vuelta a España.

“I join Trek-Segafredo after several years in which I have consolidated my position as road captain and reliable domestique. It is a role in which I see myself fitting well, thanks to the experience gained in great teams and alongside strong leaders,” Cataldo said.

“I definitely approach this new experience with great enthusiasm. I know I’m joining a solid and well-equipped group, that has always shown competence and vision. I have known Luca [Guercilena – general manager] since a long time, we worked together for two years in Quick-Step. I have great respect for him, both as a man and as a manager. When we spoke, he gave me great confidence in the Trek-Segafredo project. The idea of paying it back will be one of my biggest incentives.”

One woman and 11 men nominated for Vélo d’Or award

Annemiek van Vleuten is the only female rider to be nominated for this year’s Vélo d’Or award. She sits alongside a male-dominated list of contenders with Mark Cavendish, Julian Alaphilippe, and Tadej Pogačar on the shortlist.

The Vélo d’Or, created in 1992, is an annual award given to the rider deemed to be the best in a single season. It is given by the French cycling publication Vélo Magazine with nominees picked by a panel of cycling journalists.

Considered one of the most prestigious in cycling, the award has often overlooked female cyclists with just two making it onto the shortlist of nominations in 2020 — Anna van der Breggen and Pauline Ferrand-Prévot. Meanwhile, no woman has ever won the award in its almost 30-year history.

You’d have excused him for still being on a beach somewhere and enjoying some rest and relaxation, but Adam Yates hasn’t taken his foot off the gas too much in the off-season.

A month after ending his season with third at Il Lombardia, and after a brief vacation, Ineos Grenadiers rider Adam Yates has run a marathon.

Yates ran the Barcelona marathon, to be precise, and finished his effort Sunday in a time of 2:58:43, placing inside the top 600 at the event.

“I think I’ll stick to bike riding,” the British rider wrote on his Instagram page.

Dylan Groenewegen on working with Michael Matthews: ‘We can help each other’

Explainer: How did Egan Bernal crash in Colombia?

What comes next for Egan Bernal after bus collision?

Pogačar’s apprentice: Juan Ayuso is the red-hot rookie you need to know about